Every year, the NCAA hosts the March Madness tournament.  Inviting 68 teams to participate in a playoff to determine the National Champion.  For universities like Duke, Kansas and Kentucky, it is an annual right of passage. However, there are approximately 347 Division 1 men’s basketball teams in the country, so for some schools, like my Alma Mater, St. Bonaventure University, making the tournament does not happen often.  Thus, it is a really big deal.

This year, the St. Bonaventure Bonnies (What is a Bonnie?) had their best season in school history.  Yet, the NCAA did not think the Bonnies were one of  the top 64 teams and made them play in a the First Four game against UCLA to determine who would be seeded 11th in the East bracket.  UCLA’s basketball tradition is rich and so when the Bonnies knocked them off 65-58, I woke up the following morning bellowing to my dogs, “WE BEAT UCLA!”  Their tail wags told me they knew the significance of a small rural school beating one of the big name basketball programs.

Beating UCLA late on Tuesday night, meant the Bonnies had to get to Dallas for their first round game against Florida that was scheduled for Thursday night.  My Wednesday was spent teeter tottering back and forth on whether to make a last minute trip to Dallas to cheer my beloved Brown and White.  At 4:30 pm, I pulled the trigger and bought an airline ticket using Skiplagged.com.  My stomach churned with guilt.

Airline prices from South Florida to Dallas on less than 24 hour notice were astronomical.  But Skiplagged is a search engine that finds the cheapest airfare using one little trick:  connecting flights that make you want to miss your connection.

So rather than paying in excess of $750, for $150 I purchased a ticket from Ft. Lauderdale to Chicago with a plane change in Dallas.  But I was never going to make my connecting flight.  I had a direct flight back from Dallas.  So I was headed to the the First Round of March Madness. 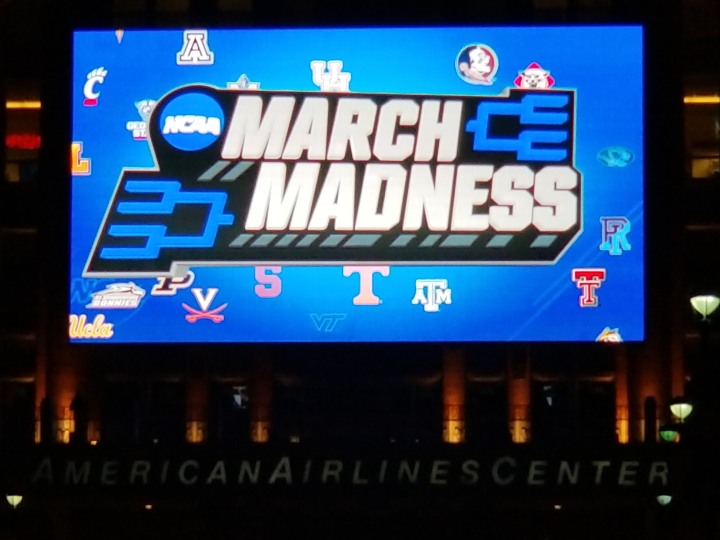 My alarm was set for 4 AM to catch my 5:30 am flight.  I have never been more excited or happy to wake up that early.  I figured I would catch some sleep on the plane.  Boy was I wrong.  I had probably the worst 2 behaved children on a flight ever.  And yes, I felt bad because Mom was traveling by herself with 2 kids under the age of 4, but she didn’t even scold the oldest when he began kicking me.  Repeatedly.  Nor did she apologize.

Anyways, it didn’t matter because I was Dallas bound.  I had never watched a March Madness game live so I was excited for the spectacle of sport.  Upon arrival at Dallas/ Ft. Worth, there was hardly a mention of any basketball games to be played.  I took the train into downtown Dallas for some BBQ.  I had visited here before, near where Kennedy was assassinated, and there were cafes and shops lining the streets.  But no longer.  I was in downtown Dallas, in the middle of a Thursday workday, and it was like being in a ghost town except for the homeless and drug addicts sitting along the sidewalks.

In fact, one guy was so high out of his mind, that he stopped in the middle of the street to send some googly eyes to the young woman standing next to me on the corner.  He was oblivious to what was going on.  Including the train’s blaring horn warning him to get out of the way.  We gasped in horror as he leapt out the way when the shadow of the train was finally upon him.  He walked away as if it was no big deal.

Adding to the depressing street scene were the two Dallas bike share programs.  I’ve read about these programs in which the bikes can be left anywhere rather than at selected docking stations. By downloading the app, a person can unlock a bike and ride it any where they want and just leave it.  And just leave it they do.  There are bikes scattered everywhere like pieces of litter on a windy day.

With no success finding food, I ubered to my hotel, the Crowne Plaza.  Rated at 3.5 stars, I figured I had gotten a pretty good deal on priceline being that the hotel was only 3 miles from American Airlines arena where the game was to be played.  If the Crowne Plaza has renovated their hotels and upgraded them throughout the years, they forgot about this one.

The decor and amenities were dated.  I say with some hesitation, that the place was clean.  It was about as clean as after you tell a 9 year old boy to clean his room.  It appeared that the hotel was vastly understaffed.  The check in agent at the desk was super friendly, but she had already had a long day and was exhausted.

After getting some work done and taking a quick nap.  It was time to find the pre-party near the arena where other Bonnie alums had agreed to meet.  After a quick train ride there, I began walking trying to find the bar.

Here’s the thing about St. Bonaventure.  We may be one of the smallest schools in Division 1, but we have some of the most loyal and passionate fans.

Of course, my only experience is that of being a Bonnie, but I can’t imagine other schools having three decades worth of graduates partying together.  My friends from home thought I was crazy for travelling to Dallas alone.  But the second I walked into the outside seating area of the Happiest Hour, I had 1000 new friends.  I chatted with a guy who graduated 16 years before me and was joined by another who was still in his 20’s.  We laughed and shared stories as if we knew each other our entire lives and went to school together.

I did run into classmates and people that I had shared drinks with a long time ago during snowy Western New York nights.  There were hugs and memories a plenty.  But maybe better than that, was the fact that I was able to experience another college night and add this to my college experience.